Making ESG Goals Tangible: Why We Need to Connect Data Dots and Fill in Information Gaps Along the Supply Chains

Last week, Kawasaki Heavy Industries claimed1 that it aims to achieve carbon neutrality in its domestic factories in 2030. They’re planning to build a hydrogen-fueled power plant that will provide electricity to its factories. Wonder why we’re talking about a Japanese heavy-equipment company? Because their plan is not just to bring down emissions at domestic sites. Their overarching goal is to show everyone a feasible and affordable way to carbon neutrality.

The fact that companies representing various industries across the world commit to reducing emissions and changing the way they have been running businesses for decades means that mitigating climate change and supporting the environment by actions is not only a responsibility of environmental activists and scientists anymore. Contributing to decarbonization and global energy transition is something every business owner(s) should keep in mind, whether they run a multi-national or national business, a retail store or a small local business, a farm, or a processing plant. In this blog, we’re looking at three agri-food pillars of a green future: reducing energy use, understanding carbon storage potential, and turning organic waste into biochar for soil amendments and feed additives.

Rethinking Energy Use: Good for the Environment and Your Bank Account

“How much are you paying for electricity? Our bills are ridiculous! We have the TV on all the time, and I keep forgetting to turn the lights off. Maybe switching to LED bulbs would help?” How many times have you had a conversation like this with your friends and family? When it comes to our households, it’s quite easy to find relevant information about how much energy is used on average and even easier to discover dozens of ways to reduce energy use. But if you want to get the same data about businesses in a particular industry, it becomes a real challenge, especially for those who manage farms and ranches. There is not enough data available, and each case is unique since energy use depends on multiple factors from size to average temperature throughout the year. What stays the same is that reducing energy consumption is vital to the future of agriculture and agri-food, not to mention cost savings to those operations gathering the data. It’s the old adage of “you can’t change what you don’t measure.”

How about a 20-30% decrease in operational energy costs? With the right tools that let you measure, analyze, and optimize energy use, it’s possible. TrustBIX is proud to be a partner with BuildSense – a software that allows you to benchmark your operation’s energy use and emissions against your industry peers and quickly see what processes can be improved. This will not only affect your bottom line in a positive way but also help verify and measure your ESG values, which is necessary across supply chains in the 21st century.

Carbon capture and storage (CCS) facilities operate in numerous locations worldwide, from Norway to Brazil, from Canada to Australia. Currently, the largest operational CCS facility in the world is in the US and has a storage capacity of seven million metric tons per year. Here, in Canada, we have CCS projects of the same prominence. The Alberta Carbon Trunk Line (ACTL) is the world’s newest large-scale carbon capture, utilization and storage system. It captures industrial emissions and delivers the CO₂ to oil and gas reservoirs. Imagine capturing CO₂ from more than 3 million cars – that’s how much CO₂ ACTL can transport every year. It’s fair to say that the future of lower-carbon economies relies on such infrastructure elements as the ACTL system, but we can’t forget about other carbon sequestration and storage opportunities. 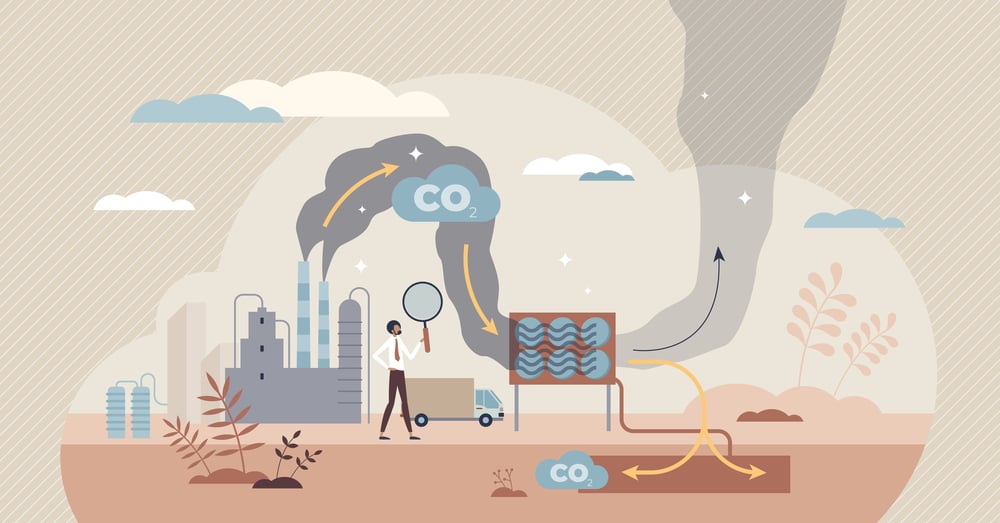 The land has the power to capture and store atmospheric carbon dioxide. Today, the community of Canadian farmers who follow such sustainable practices as subterranean irrigation, no-till farming, and using organic fertilizers make a significant contribution to reducing the amount of GHGs in the atmosphere. One additional benefit of shifting towards sustainability in your operation is claiming that you do take action to help achieve global goals. Here, at TrustBIX, we are able to support those claims through data and benchmarking to build trust among all supply chain links.

Living in a 3R circular economy (Reuse, Reduce, Recycle), it’s impossible to waste anything that has the potential to be recycled. Waste from different stages of food production processes can be used in numerous ways, but mostly it’s used for animal feed, biochar, and soil amendments production.

The concept of using waste from food manufacturing in animal feed and soil amendments is not new. Biochar, which we have covered in this blog, is a relatively new concept of reusing organic waste and turning it into a revenue stream. However, as more and more companies, such as big retailers, want to recycle their organic waste, and there is a potential for this process to become a significant practice, new concerns arise. For example, if the waste is not managed properly, it can get contaminated and cause animal health issues when used as a feed additive. It’s equally critical to know all the components of biochar and soil amendments based on organic waste or animal by-products. That’s why having the ability to prove that protocols are followed and being able to provide the history of the source of waste and how it has been handled is vital for anyone who wants to turn organic waste into new resources. It is being done today and you can do that as well with our enhanced BIX platform.

At TrustBIX, we believe that investing in actions that bring tangible results is the most efficient way to help the world where to trust more, waste less, and reward sustainable behaviour. Contact us today to learn more about each of the three pillars covered above and how they can impact your business, large or small. Start making significant changes one small step at a time. Together, we can and will make significant changes for the planet.